Aging and Dying in Prison

Staff of The Nathaniel Centre in conjunction with Richard Clement

The State Services Commission reported that between 2000 and 2009 there was a 94% increase in the numbers of prisoners aged 50 years and over.1 Figures from Corrections Department New Zealand show that between 2004 and 2015, the numbers of prisoners over 70 increased from 35 to 188, a more than five-fold increase in 11 years and up from just 51 in 2011.2 This trend clearly outpaces the increase in the numbers of elderly in New Zealand society as well as the growth in the general prison population, something which points to the influence of other factors.

Prison reform advocates such as Kim Workman have identified longer prison sentences, along with more conservative Parole Board decisions, as at least partly responsible for the trend. At the same time, while the Parole Board’s main consideration is community safety, Workman and fellow advocate Phil McCarthy, national director of Prison Fellowship New Zealand, note that there are some elderly inmates who are not being released, even though they are not physically or mentally capable of offending, because of a lack of support in the community and a lack of suitable release places.3

The ageing prison population is creating challenges for a system that was never designed to meet the specialised health needs of older prisoners nor designed to support people with life-limiting illnesses who are dying. Reflecting on the situation in Australia, Chris Puplick, chair of the New South Wales Justice Health and Forensic Mental Health Network Board, believes that the need for palliative care in prisons hasn’t been adequately addressed because prisons have typically been considered places where young, fit, aggressive people were confined and thus have been built for the young and the fit and not the aged and frail.4

In Australia, it has also been reported that crowding meant some elderly prisoners were required to take the top bed in a bunk … corridors or cells could not accommodate wheel chairs. Walking sticks and walking frames were regarded as potential weapons, so “falls are a regular occurrence”.5 Similarly, a United Kingdom report on older prisoners found that “older prisoners frequently have significant health needs that prisons struggle with. As well as increasing numbers of prisoners requiring palliative care, there are several hundred older prisoners suffering dementia.” The report lists “the multitude of extra ways that older prisoners suffer during their incarceration, ranging from being unable to wash or leave their cells, to receiving substandard medical treatment inside the prison and being shackled in hospitals when dying.”6

The ethical issues that arise around medical treatment are no different for prisoners, although the dynamics of a prison environment can create additional challenges. Susan Baidawi, a research fellow at Monash University in Australia and author of various reports and research articles on Australia’s ageing prison population speaks of a need for a fundamental shift on numerous issues, including pain management which is contentious because of high rates of substance abuse among prisoners. Baidawi also points out that there are inherent challenges in offering the community-based model of palliative care, based as it is on principles of dignity, choice, autonomy and collaborative decision making, in a prison system that is structured around, and dominated by, the maintenance of high levels of security.7

In New Zealand, the challenges of caring for prisoners with a life-limiting illness have come to the fore in recent months as a result of the widely publicised case of Vicki Letele, a 35 year old mother of three dying of cancer who was eight months into a sentence of three years and two months for fraud. The Parole Board initially turned down her request to spend her remaining time with her family, deeming that she did not meet the exceptional circumstances test for early release.8 They subsequently reviewed their position and Letele, who has since died, was finally released on compassionate grounds. In Letele’s own words: “I think things need to be re-looked at when you're given a time frame on your life … [My prison sentence is] not a life sentence."9

Experienced Rimutaka Prison chaplain Richard Clement comments that “prisoners don’t want to have on their death certificate that they’ve died in prison – nobody wants to die in prison.” However, increasingly, there is an acceptance that this is going to be the reality for greater numbers. “While the parole board can make a recommendation to move patients into a hospice care setting, there are increasingly occasions where, because of the type and seriousness of offending, and a penal policy reflecting public expectations of harsher and harder sentences, men will not be released,” says Clement. “The fact that there can be a backlash from some members of the community means it’s not an easy decision to release certain prisoners.”

In New Zealand, most older and disabled male prisoners are managed in mainstream prison units, but, in 2012, in an attempt to respond to the changing needs of the ageing prison population, a High Dependency Unit (HDU) was opened at Rimutaka Prison to house male prisoners with health issues that make it difficult for them to function independently but who are not eligible for release. Most residents in this unit are in their seventies or eighties.10 Then, at the end of 2015, this unit was expanded with an additional 10-bed wing bringing the number of prisoners able to be accommodated up to 30.

Clement describes the HDU: “It is set amongst trees and has no actual bars on the windows, making it less prison-like and the best option short of a hospice. It is not like the rest of prison, although it is still very evident that it is a prison – the lights go off at certain times, the doors are locked and so on – but within the restrictions of that framework the Department of Corrections have nevertheless managed to create quite a caring, sensitive environment. I give the department full credit for that,” he says. Prisoner-patients have single-person rooms which look more like hospital rooms than prison cells.11

In the HDU, critical medical decisions, such as not resuscitating a patient who is dying, are normally made in consultation with the patient and their family. This simply reflects good medical practice. However, what concerns Clement greatly is what happens when a prisoner’s family is not there to advocate for him? In such situations chaplains may take on that role. “I was once appointed as a welfare guardian for a prisoner who was elderly and had advanced dementia and whose file had been stamped ‘DNR’. I questioned this, and asked that the health professionals speak to me, just as they would have to the prisoner if he had not been incapacitated.” It is his strongly held view that significant decisions relating to ‘life and death’ about a prisoner-patient should be in the hands of an independent third party. “How do you otherwise ensure that the decision is not being driven by cost saving factors?” he asks. “The local palliative care service could perhaps be that third party.”

When a prisoner in the Rimutaka HDU requires community-based hospice services, hospice staff come in and consult with the prison staff, and arrange access to special beds and equipment as needed. There is a dedicated registered nurse at the unit as well as healthcare assistants providing 24 hour care. Clement is “impressed with the Department of Correction’s decision to take on health care assistants at the HDU – there are usually four or five health care assistants and they look after the patients in the unit very well; they make cups of tea, they talk to them as well as assisting them with the everyday activities they need help with such as showering, toileting and eating.” A GP on contract visits one day a week and is on call across the site. In addition the HDU team work closely with the local district health board with the aim of providing the same levels of healthcare available to the general public.

Richard and other chaplains are often called upon after a prisoner has died. When a death is unexpected, the chaplain enters and blesses or ‘cleanses’ the room. This is an expectation of staff and prisoners, and is culturally important for Māori and Pacific in particular. In circumstances where the cell is being treated as a potential ‘crime scene’, he will stand outside the cell and pray. “The cell windows are covered and the wing which is usually raucously noisy is deathly silent. As soon as I am able, I go to the body. After that I will walk around the wing praying; I can hear voices saying ‘thank you, padre’. I bless the wing with holy water. Often staff will follow me as I walk around. When a death happens, I meet nothing but respect and quietness.”

The chaplain’s role is also to be there for prison staff. Staff will ‘de-brief’ in prison especially for deaths where there is associated trauma, such as with suicide. “There is a very respectful relationship between staff and prisoners when a person dies in prison, regardless of what the prisoner may have done,” says Clement. “Death in a prison has far-reaching impact – the ripples go out and out. Prisoners generally start to question life and death; some may blame the suicide victim for not having had the courage or strength to carry on; some are just gobsmacked; others are saddened and go through grief. For some prisoners it leads to an opening-up of unresolved grief from long ago for all sorts of things.”

Unsurprisingly, the issues prisoners face when they are dying are the same as for other people. “Dying is a time for reconciliation, for ‘putting to rights’. As a chaplain I encounter regrets all the time – men questioning the purpose and meaning of their life - ‘How did I end up here?’ Typically, the men in the unit have a life view that differs from younger prisoners, including a greater interest in faith-related matters. They will talk about the past a lot and quite often they reflect on their childhood. Those that have had some trauma will try to deal with the bad memories and will share that … some have a lot of regrets. But, when they are at that contemplative stage of life they also reflect on the things in their life that are not so bad.”

The chaplain tries to stay with a dying prisoner if possible, but will only become involved if the person wants spiritual care. Chaplains support prisoners of all faiths and none. “In some cases, sadly, prisoners have no family support,” reflects Clement. “Sometimes families disavow a prisoner because of the nature of the offending, so these prisoners are without family when they die. These prisoners will sometimes ask me about what will happen to their bodies after they die - who will arrange for their burial and attend their funeral? Sometimes the chaplain will take care of it, applying for funeral grants from Work and Income, negotiating with funeral directors, and delivering the ashes to family. The family may have become isolated from the person. They might also want to avoid a funeral bill.” Clement has personally taken on the role of organising a funeral a number of times, once spending two days walking in the Akatarawa ranges in search of a final resting place for an inmate.

The conversation with Richard concludes with a question about what has touched him the most over the years in his work with prisoners who are dying. He replies that, unfailingly he is “moved by the compassionate care and reverence staff and other prisoner-patients show to men who are nearing the end of their lives; a care that looks beyond a person’s past and that reflects the innate dignity that belongs to each and every person no matter what they may have done; a care that sees and treats everyone as a fellow human traveller deserving of love, a care that brings out the best in all of us.” 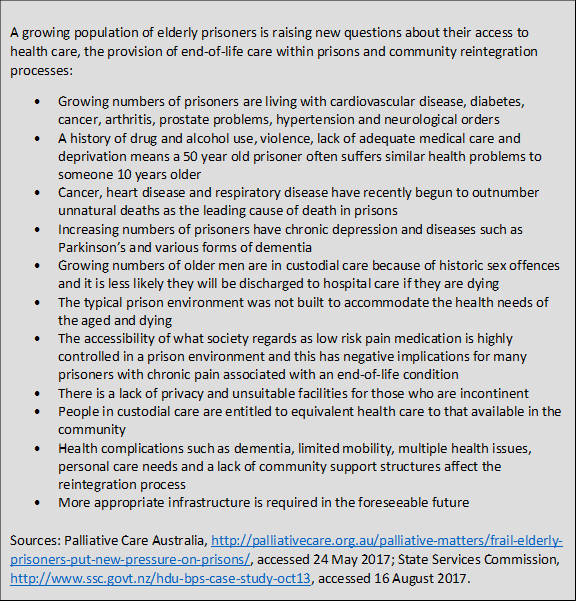