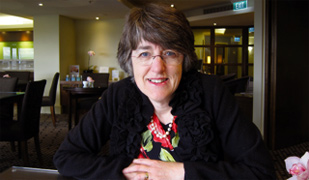 Baroness Ilora Finlay is a doctor, professor of palliative medicine at Cardiff University and an independent crossbench member of the House of Lords. She explains to Michael Fitzsimons how her opposition to euthanasia is not on religious grounds, but entirely a matter of public safety.

Baroness Ilora Finlay flies into New Zealand and straight into a media storm on euthanasia. Most media opinion is favouring ‘death with dignity’, a phrase that somehow has become synonymous with physician-assisted suicide. Even Prime Minister John Key has entered the fray, expressing his broad support for euthanasia and offering the view that it already happens in New Zealand hospitals. His views draw a sharp denial from palliative care specialists.

Several public meetings and a number of interviews later, including one with the hard-talking Kim Hill, Baroness Finlay sits down to chat in a quiet corner of the Hotel Intercontinental in Wellington. A highly qualified and articulate woman, Baroness Ilora has dedicated her professional life to ensuring that the dying are treated with compassion and dignity.

“It’s important first to understand that the Bill you have before you in New Zealand is the most radical and extreme of any piece of legislation anywhere in the world, because basically it’s euthanasia on demand,” says Ilora. “Its safeguards really are paper thin, to the point of being absent. It’s even more extreme, in some ways, than the Netherlands legislation. I’m sure it will be at least amended, but I think a lot of the dangers that have occurred in other parts of the world are slap-bang in the middle of this legislation.”

The legislation she is talking about is Labour health spokesperson Maryan Street’s End-of-Life Choice Bill that is currently in the Members’ Bill ballot in Parliament. The Bill would make it legal for those diagnosed as terminally ill, or with an irreversible medical condition and in control of their mental faculties, to choose to die. Assisting clinicians or family members would be protected from liability. The Bill also includes provision for end-of-life directives, so a person can make their wishes known before the advance of a terminal illness.

According to Ilora, who is co-chair of a UK-based think tank which researches, analyses and publishes the evidence surrounding euthanasia, Maryan Street’s Bill fails to take account of the realities and complexities of an end-of-life decision.

“If you’re going to make any decision, you first need to have accurate information, the mental capacity, and freedom from coercion. Now, this Bill first of all requires that the person has a prognosis of less than a year to live. It is impossible to predict this. Even if someone is in the last hours or days of life, it’s impossible. There is a lot of evidence that in 3 percent of cases where people are given 48 hours to live, they don’t. So that’s pretty meaningless.

“As for the diagnosis, even with that time-frame, we know that about one in 20 post-mortems show that the diagnoses have been wrong, and that people have been treated for the wrong thing. How do you know as a patient, then, that this really is a life-limiting condition? How do you know if there isn’t something treatable that’s been missed, that your prognosis is right? That you’re not going to be someone like Stephen Hawking, who was once given months to live?

“Just as importantly, the legislation only requires one week to pass between the first assessment and when they can receive the go-ahead. There are many people that may feel for many weeks that their lives aren’t worth living, but later on go on to say they’re glad to be alive — people’s desire for death is fluctuant.”

Ilora also takes issue with the Bill’s requirement that a person wishing to end their life must be asked about informing their family, but the family doesn’t have to be told.

“Imagine a person who thinks they’re being a burden on their family, who believes that their life is of no worth, and who’s been told they have a life-limiting illness — and imagine that perhaps they’ve had some cross word with their family. Now, their family goes away for a fortnight, and that person has decided to kill themselves. How does that family live with that, explain this to their children?

“Not only are there no safeguards for the patients, but it also ignores the fact that people are interconnected, that even people who feel apart and lonely are connected to others.”

“Mental capacity fluctuates and can’t be measured as a one-off,” says Ilora.

“It’s very difficult to measure mental capacity. You need to have good psychiatric or neuropsychiatric training to assess mental capacity in many disease states. Drugs also affect the way patients make decisions — patients on therapeutic steroids often describe feeling emotionally labile, hypersensitive to things, easily weepy, somewhat depressed. There is evidence from Oregon that of their patients who have gone through the safeguards process and have been given the go-ahead for a lethal injection, one in six has an undiagnosed and untreated depression.”

Freedom from coercion sounds straightforward, but it’s a freedom that is terribly hard to preserve in practice.

“Subtle coercion is often there. Older people quite often do have a sense that their family should be spending money on the younger generation and they are of value to nobody.

“The people who want to end their lives are not doing so because of pain. The distress seems to be much more around people’s perception of themselves, worries about being a burden, issues of dignity. If people treat you with a lack of respect, as a nuisance, you lose dignity. There are profoundly disabled people who need an enormous amount of help — look at Stephen Hawking — but that doesn’t make them any less of a person.

“I think we also have generations now, like my own, who think that you have to be young, fit, and beautiful to be worth something, without recognising that it is normal to age, and that we’re fortunate to be able to age.”

Ilora’s views on euthanasia have been tested to the limit by her personal experience, when her mother  — an independent, intelligent, strong-willed woman — developed breast cancer at 84 and didn’t wish to carry on.

“My father had died some years previously and she was living alone. She didn’t want any treatment at all. Then she developed cancer in her pelvis, and severe pain went along with that. She initially refused radiotherapy, then accepted some. She did not want people caring for her. She was convinced she wouldn’t be able to return to her home, and she certainly didn’t want to be dependent on my brother or me.

“She was angry at me for opposing Lord Joffe’s Bill on physician-assisted suicide.

“I felt very conflicted. Here was my mother, who had been our family’s mainstay, who could see no value in her own life and wanted to commit suicide. She fitted every criteria in your Bill twice over. This went on for several weeks.

“But then the hospice chaplain came and spoke to her. He knew that talking religion was a waste of time and instead engaged her in an argument about philosophy, which was her area of study. He allowed her to argue with him, and came back the next day to argue more. I think she thought, ‘although my body is broken, my brain still works, and here’s someone who’s interested in the intellectual side of me’. She felt she’d regained value, I think.

“She set about living again, and engaged in physiotherapy, and eventually she went home and got to live independently. She came to visit me, she made a radio programme, she wrote a piece called ‘Hope and Hopelessness’ for the Journal for the Royal Society of Medicine. She remained at home and eventually deteriorated, and although in the remaining days of her life she spoke about wanting to die again, this time she didn’t want to precipitate it deliberately. She said the last four years of her life were some of her richest.”

Ilora is adamant that if a system of supplying legal drugs is put in place, it shouldn’t be part of clinical medicine.

“Don’t ask your doctors and nurses both to improve quality of life and anticipate death, to go both ways at once. The result will be that some will slip away from striving to improve quality of life, because it’s actually very, very hard work. It’s easier to give up sometimes. There are times during my own career that I’ve been glad the law is the way it is because it has stayed my hand and forced me to go back and think again, and when I’ve been tired and stressed with my own issues it has taken extra effort to do that.”

For Dr Ilora Finlay, the practice of medicine is about the living and the palliative speciality is not a depressing one at all.

“Quite the reverse. The thing that gives me hope and fulfilment is being able to use my best diagnostic skills to work out what’s wrong with them and relieve their distress. It’s about finding some way forward, while always accepting that death is inevitable. I’ve become aware that life is transient and fragile, and that sometimes the most unexpected and beautiful moments happen when nobody would have expected them.”